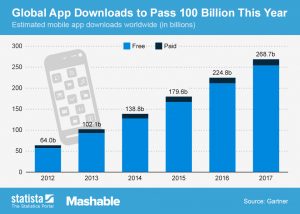 Gartner statistics suggest the number of global apps downloaded in 2012 was 64 billion. It marked a consistent rise throughout these years to reach a whopping 268 billion downloads by the year 2017. While these numbers are already overwhelming; we may still observe a rise in the app downloads for the coming years. You may wish upon watching out for these numbers the next time you place your app in any app store. The competition is getting tough day by day. And it no more an easy job to boost your app’s discovery and ranking.

App Store Optimization is the best way to have a higher app ranking. It comes with a set of strategies to increase your app’s discovery in the store. ASO is kind of an identical twin to SEO. ASO boosts your app’s rank in app store whereas SEO boosts your website’s rank in search engines.

So, the question is how to start with ASO? What are the fundamentals of ASO? And how do you achieve it for higher app ranking? Don’t worry if you are new to this.

We have listed out ASO basics for a complete guide to app ranking:

The idea is to get your app discovered by the users when they type in particular keywords in their app store search. So, one need to focus on keywords and it isn’t just about targeting the ones with the highest traffic. These keywords already have major successful apps getting displayed on top. Chances are that your app may not be seen if you only target for such keywords. Instead, target relevant keywords keeping a balance of difficulty and traffic in mind.

Apps with a keyword in its title have 10% more ranking compared to the ones having no specific keyword in the title. Even though it is not a compulsion to add them, it is nice if you find a catchy and relevant title revolving around your targeted keyword. Make sure it is not too wordy. Long titles are generally not attractive. The maximum allowed length of the title is 30 characters for Apple’s App Store and 50 for Google Play Store.

When it comes down to writing a description for your app, it is the best opportunity for you to lure your audience for its download. So, make sure to use keywords in a moderate amount. Highlight the purpose of the app and play with words to make it attractive.

The genre of the app plays a very important role when you are targeting a specific audience to boost app ranking. Selecting a relevant app category is a good idea. But you can always opt for other semi-relevant categories as well if it has a higher potential of generating revenues. Remember, you can test your app under several categories until you find the one that works out the best. iOS 8 has recently released the subcategory option to place your apps more specifically.

Videos have a long-lasting effect on the mind of its viewer. App-specific videos have a higher tendency to bring in the required traffic and downloads thus accelerating its rank. Avoid crafting videos showing basic tutorials and how to guide. Bring your app to life and highlight the features that are catchy or innovative. The length of these videos should also be considered. A 30-second long video is good enough to convey your app in brief.

Think from your users’ perspective. Would you like to download an app that shows irrelevant images of the app or just random screenshots from here and there? The answer is an obvious NO. App screenshots give the very first impression of your app and you cannot afford to lose at this point. So, invest some time and have a thorough analysis of your app to capture some of the best screenshots of your app.

Each of the screenshot should uniquely convey your app’s key features. Add specific text to explain ideas clearly.

App size is another important factor to keep in mind when you aim at ranking your app higher. Users generally avoid downloading heavy apps as they end up using more amount of device storage space. Think about it the other way, the user might find a relevant app that is less in size to uninstall your app just because it is using more space. Try making the app size as smaller as possible.

When you have covered the above checklist of App Store Optimization, the chances of pushing your app towards a higher rank will increase. However, optimization is not a one-time process and it requires consistent efforts to see visible results.